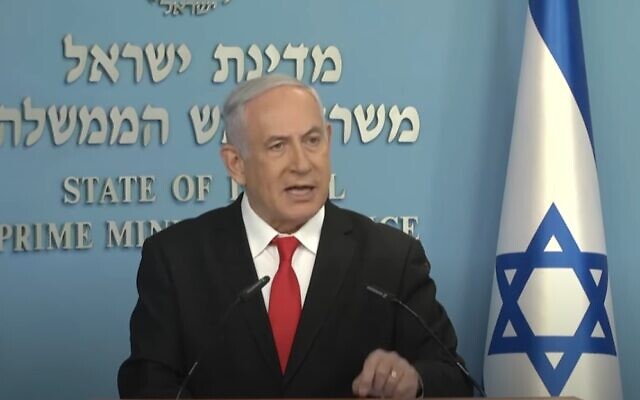 Prime Minister Benjamin Netanyahu has announced that he will accept a political compromise to extend the deadline for voting on a final state budget. If he carries through with the promise, this would put to rest the prospect of new elections in November, which would have been the fourth round in Israel in just 18 months.

“Out of national responsibility I decided to accept the compromise proposal of Knesset Member [Zvi] Hauser,” Netanyahu announced during a news conference on Sunday night.

Hauser’s plan, if passed, would delay the deadline for passing a final budget to December 3. Otherwise, the Knesset would have had to pass a budget by midnight Monday, August 24.

“This is the time for unity, not the time for elections,” Netanyahu said during his news conference. “Let’s unite and work together. If we act in harmony, the government will last its term.“

He argued that national unity is needed to fight the coronavirus, resuscitate the economy and ensure more peace plans with Arab nations, such as the one just announced last week with the United Arab Emirates. The prime minister said he expects more countries to announce diplomatic relations with Israel soon.

Netanyahu’s comments came after his coalition partner, the Blue and White party, accused him of manipulation and “spitting in the face of the Israeli public.”

“We call upon the prime minister to get in line and come back to seeing the good of the country rather than his own personal good,” the party said in a blistering statement released earlier on Sunday. “While 9 million citizens expect unity and to address security needs and the coronavirus crisis, the Likud is preoccupied with political manipulations. They are spitting in the face of the Israeli public out of personal considerations.”

Even though Netanyahu said he would accept the compromise, the Knesset still has to vote on the plan by the end of the day Monday.

The coalition agreement between Netanyahu’s Likud party and Defense Minister Benny Gantz’s Blue & White party calls for the passage of a two-year budget. In recent weeks, however, Netanyahu and his team have been trying to push for a one-year budget. Many Knesset members and political analysts have seen Netanyahu’s gambit as a push to blow up the coalition and go back to elections in order to prevent Gantz from becoming prime minister in 2021.